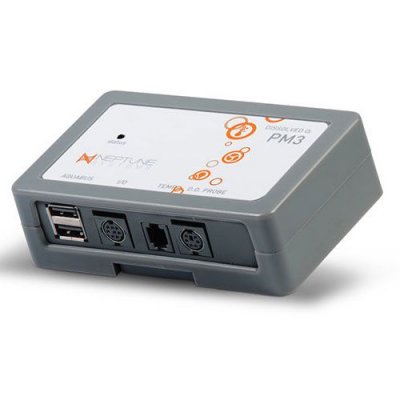 Be the first one to write a review
The PM3 module monitors realtime dissolved oxygen in your aquarium water. It is a great safety net!
€120.00
Less than 3 in stock
Description
REAL-TIME MONITORING OF DISSOLVED OXYGEN IS A GREAT SAFETY NET Many marine aquarists only give the o...
Description

REAL-TIME MONITORING OF DISSOLVED OXYGEN IS A GREAT SAFETY NET

Many marine aquarists only give the oxygen content in their aquarium water a passing thought, not fully understanding how the level of the Dissolved Oxygen (DO) in their tanks can affect their entire tank population. In one way or another, everything (fish, invertebrates, corals, algaes, bacteria) in the oceans and in marine aquariums react with oxygen. Most of the living beings of this planet require oxygen in order to metabolize nutrients. Fish, invertebrates, corals, and bacteria ingest O2 and expel CO2 day and night.

Your critters are not the only things that use oxygen in your tank. Organic materials (i.e. Dissolved Organic Compounds, uneaten food and fish detritus on the bottom of the tank) consume a lot of oxygen as they break down. And now it’s even popular to add nitrifying bacteria additives which multiply very rapidly, consuming a large portion of the available oxygen in the tank water.

Of all the organisms in your aquarium, large fish are the most acutely at risk to low O2 levels. In some situations with heavily loaded systems, simply the failing of a skimmer can bring the O2 levels down to dangerous levels and cause a chain-reaction fish die-off . This is where the PM3 Dissolved Oxygen module comes to the rescue.

GET AN ALARM, APEX TAKES ACTION

Should your aquarium O2 start to approach the danger zone, the Apex can alert you immediately by audible alarm as well as send you an email. But, that’s not all. You can have a couple of air pumps with air-stones on the ready in your sump and the Apex will turn them on if the O2 starts dropping too low.

And, there is an added bonus, you get an extra temperature port as well as six I/O switch inputs. Purchase our optional I/O Breakout Box and you can monitor the off/on state of six I/O signals. This is useful if you want to set up an ATO (Auto Top Off), a feed button, or even a sump door alarm or light switch.

NO SUCH THING AS A FREE LUNCH! (Dissolved Oxygen probe sold seperately)

While the cost of the Dissolved Oxygen Module – PM3 is very reasonable, the down side is that the DO probe itself is relatively expensive. The DO Probe certified and sold by Neptune Systems is a lab grade device and costs about 5x the cost of the PM3 module itself. That’s the bad news. The good news is that the probe has replaceable membranes so you don’t have to throw it away when it wears out like other probes. Instead, every three months you simply put a new membrane in the probe – at a cost of only $8.

FEATURES OF THE DISSOLVED OXYGEN MODULE: